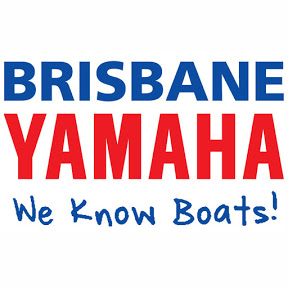 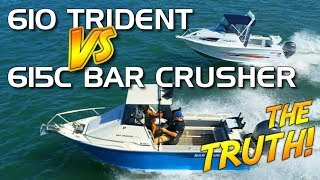 Two Australian plate boat legends, head to head, measured truthfully and compared fairly. Different hulls, shapes, features and inclusions. One, however, is tens of thousands of dollars more. Which is the better choice? You decide. Here is the truth about these two exceptional plate boats. With the Quintrex Trident 610 and the Bar Crusher 615C in the same view, the Trident looks significantly bigger, but this is an optical illusion. They are both almost exactly the same size, with the exception of the Trident being 200mm longer. The reason for this visual misconception is to do with the shape of the boat, but primarily where the floor is and how it's designed. The Bar Crusher 615C's floor is below the water line, which creates some interesting benefits, as well as some limitations and issues, such as not being able to have a true self draining deck utilising scuppers, and having to fuel up the boat from within the boat itself(isn't that illegal?). The kill tank in the Bar Crusher is pretty small, but the one in the Trident isn't much better. There are a few features here and there that are included on one model and not on the other, but realistically these are preferential and not necessarily deal breakers for the average boater, possibly with the exception of the transom 'door' on the Bar Crusher, being a piece of plastic that resembles your kitchen cutting board, and the folding rear lounge which unavoidably obstructs the entry and exit of the boat. The folding top and windscreen on the Bar Crusher is cleverly designed for storage and may option up more options for those with limited space. The bimini and rod rack on the Trident is of course fordable, but may not achieve the same amount of reduced space requirements as the Bar Crusher, the difference would be minimal. On the water, both boats do quiet well. They certainly are capable off-shore true plate boats. Both boats performed well and where quiet soft in 0.5 - 1 meter swells. The differences in hulls and shapes did cause one to perform better than the other in certain circumstances, but overall they were very similar in their performance. Some differences to note is how the Trident pushed the water out nice and wide, and behind where the driver and passenger seats are on the boat, whereas the Bar Crusher pushes water forward and down, making the Bar Crusher a wetter boat in certain conditions. On the trip back to the ramp, the apprentices did get wet in a following sea. This can be overcome utilising the folding top and some nice side clears, but is still an unfavourable result. One issue encountered with the Bar Crusher was when the boat is reversing in choppy conditions. Due to the low floor, the boat wasn't able to reverse without lots of water swamping the back of the boat. Every boat of this size will have water splashing around when reversing, but shouldn't have water swamping in. With this said, you shouldn't need to reverse in bad conditions out in the ocean very often, but those more serious fisherman who are chasing a large bill fish will need to seriously consider this issue. Overall both boats are good, well built, Australian made true off-shore plate boats, the Bar Crusher however is tens of thousands of dollars more expensive than the Trident, something to consider when purchasing a quality Australian made plate boat(because you'd be mad to buy a plate boat not made in Australia...). Both boats were powered by Yamaha; the Trident with a F130hp 4-Stroke and the Bar Crusher with a F150hp 4-Stroke. In a head to head race, the Trident performed surprisingly well and kept up with the F150hp for most of the race, thanks to the exceptional Blade Hull. After a while however, the F150hp got ahead, as expected. This comparison showed us that a F130hp was enough for this sized boat for most boaties.